His Eminence Metropolitan MARK of Berlin and Germany,
Vice President of the Synod of Bishops of the ROCOR,
Overseer of the Russian Ecclesiastical Mission in Jerusalem,

Parish priest of the cathedral of the Holy New Martyrs and Confessors in Munich. 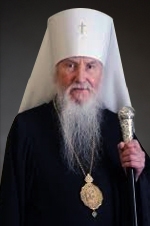 After finishing the 13-year school program in Frankfurt am Main in 1960, the future bishop volunteered for military service in Western Germany, where he served for 1.5 years. He was later drafted several times and reached the rank of lieutenant-senior.

In 1962, he enrolled in the Historical-Philological Department in Frankfurt University, transferring later to Heidelberg University. There he specialized in Slavic and English, including Russian, Serbo-Croatian, Slovak, Czech and Macedonian languages and literature. His doctoral thesis was entitled: “Biographical Literature of the Tver Duchy in the 14th and 15th Centuries.”

The study of Russian drew the young student to the Russian émigré community in Frankfurt. Studying under Professor Dimitri Chizhevsky in Heidelberg, he visited Mannheim’s Church of St Alexander Nevsky of the Russian Orthodox Church Outside of Russia, where he converted to Orthodoxy in 1964, later becoming a reader. Trips to Mt Athos, his friendship with Athonite elders on Karoulia (Hiero-schemamonk Seraphim, a second Hiero-schema-monk Seraphim, Hiero-schema-monk Nikolai, Schema-monk Nikodemos), visits to the Skete of St Elias and St Panteleimon Monastery, where he became acquainted with Hiero-schema-monk Avel (now Archimandrite at St John the Theologian Monastery in Ryazan’) spiritually determined the path of this Doctor of Slavic Studies. His further scholarly work concentrated on St Philaret of Moscow.

Starting in the fall of 1973, the future Vladyka began studying theology in Belgrade, where he graduated with a degree in theology in 1979. His personal acquaintance with Archimandrite Justin (Popovic), living then in exile in Celije Monastery, drew him into the tightly-knit group of the Serbian elder’s students, then hieromonks, now bishops of the Serbian Orthodox Church—Amphilochius, Afanasi, Artemije and Irinej.

Ordained to the rank of deacon in 1975, the future Vladyka Mark soon dropped teaching Church Slavonic and Ancient Russian Language and Literature in Erlangen, and also his scholarly work, in order to be tonsured to the monkhood, performed in the summer of 1975 in Lesna Convent near Paris. Three days later, Fr Mark was ordained hieromonk and appointed as Deputy Rector of the Russian church in Wiesbaden. In the summer of 1976, by decree of the Synod of Bishops, he was elevated to rank of archimandrite. Archbishop Paul (Pavlov, +1995), then Bishop of Stuttgart and South Germany. Archimandrite Mark ministered to three parishes—Wiesbaden, Darmstadt and Saarbrukken. He devoted himself to preserving the Czarist-era churches in Germany, renovating and expanding the Russian cemetery near the Wiesbaden church, where he performed the full cycle of monastic services, and where he began teaching the young people attracted to Orthodoxy, while at the same time continuing his theological studies, successfully passing examinations in Belgrade.

After the death of Archbishop Theodosius of Sydney, Australia and New Zealand, the Synod of Bishops appointed His Grace Bishop Paul, then Vicar of the Diocese of Berlin and Germany. Bishop Paul’s see was then given to Archimandrite Mark, who was to assume the title of Bishop of Munich and Southern Germany. His consecration was performed on November 30, 1980, at the Synodal Cathedral of Our Lady of the Sign in New York. As is tradition, during the rite of nomination, Archimandrite Mark read a sermon in which one could see a repeating theme, that of how to lead his flock. He had warm words regarding his spiritual closeness to the Serbian theologian and ascetic, Archimandrite Justin (Popovic, +1979) and also to Holy Mount Athos. The consecration was headed by His Eminence Metropolitan Philaret (Voznesensky, +1985), along with Archbishop Vitaly of Montreal and Canada, and Archbishop Anthony of San Francisco and Western America, Bishop Laurus of Holy Trinity and Syracuse, Bishop Paul of Sydney, Australia and New Zealand and Bishop Gregory (Grabbe, +1995) of Manhattan.

After his consecration, Bishop Mark moved to the Monastery of St Job of Pochaev in Munich with a small monastic community. The monastery was reestablished and renovated. From 1981, the periodical Vestnik Germanskoj Eparkhii [Bulletin of the German Diocese] began publication, a printing press was established (publishing works in Russian and German), and the production of candles and incense began. The monastery followed the Athonite rule. In the fall of 1982, Bishop Mark, because of the serious illness of Archbishop Filofei (Narko), accepted the title of Bishop of Berlin and Germany, but continued to reside in the Munich monastery, from where he continues to rule the German Diocese.

In the mid-1980’s, Vladyka Mark was appointed Ruling Bishop of the Diocese of Great Britain and Rector of St Alexander Nevsky Parish in Copenhagen.

In 1997, he was appointed Overseer of the Russian Ecclesiastical Mission in Jerusalem.

On December 10th, 2019, the feast day of the Kursk-Root Icon of the Mother of God, Archbishop Mark has been elevated to the rank of metropolitan by the Holy Synod of Russian Orthodox Church Outside of Russia.